THE GREATEST TV SHOW THEMES OF ALL TIME?

As soon as the phrase TV show theme is mentioned, we can guarantee your favourite will have popped into your head! A great theme really can make or break a show, but what makes a iconic, memorable theme?

We have compiled a list of some of our favourites, from sci-fi classics, to popular songs used as TV show themes, to original compositions which fit perfectly, or cartoon themes which have no right being as epic as they are!

We have also included a YouTube video of the song so you can sing, hum or tap along to your hearts content!

Have another favourite TV show theme that isn’t listed here? Let us know in the comments or on our social pages!

Some songs are already hits, but they fit so perfectly with a TV show you think they were made for each other! Other songs become hits because they feature on popular shows, and sometimes shows use specific songs at certain times to create an emotional response in the audience. These are TV theme songs that you can’t help but sing along to during your favourite show!

They’ll be there for you! Since it first aired in 1994 until the final episode in 2004, The Rembrandts “I’ll be there for you” was the iconic intro. You would be forgiven for thinking that the song was written for the show it fits so perfectly, but it was a popular song it its own right before it sound tracked turn of the century New York City living.

“Take a little walk to the edge of town, and go across the tracks”, croons Nick Cave at the start of his hit ‘ Red Right Hand’, the intro theme of Peaky Blinders. The song captures the characters and context of the show perfectly, and it could almost be Tommy Shelby that Cave is singing about. The song has been covered many times for the show and used as alternative theme songs, including by the Arctic Monkeys!

Carry On My Wayward Son is one of the most popular songs by legendary US rock band Kansas. It has one of the most distinctive and memorable harmonised intros ever and has become the unofficial theme song of Supernatural after featuring during many of the shows most important moments during all 15 season!

2. Capturing the Mood of the Show!

Sometimes an original piece of music for a show is so good you can not get it out of your head! This often happens because it captures the mood of the show perfectly, and really gets you immersed in the world you favourite show is set in!

As you expect from the zombie action-thriller smash hit, The Walking Dead, the intro is suspenseful, frantic and terrifying. It gives sense of the dread the characters must feel and the extreme environment they now live in.

BBC’s Sherlock staring Benedict Cumberbatch and Martin Freeman is truly a modern classic. The theme song gives a sense of wonder and excitement, mixed with enough intrigue to let you know it is a Sherlock Holmes show! You can just imagine London’s best detectives solving crimes while this one plays!

Fans of The Witcher video game and books were very apprehensive to hear the theme music for the TV adaptation, but they were not disappointed. It pays homage to the fantastic music of the video games, particularly the third, while adding new elements which fit with Henry Cavill’s portrayal of Geralt of Rivia!

3. Legendary Sci-fi Themes That Take you to Outer Space!

Not only are Sci-fi shows some of the most loved, but they have some of the most memorable TV show themes! Similar to the previous category, these fit the show perfectly, and prepare you for the crazy science-fiction adventure which is to unfold.

One of Netflix’s biggest shows ever! Stranger Things is the perfect mix of science-fiction excitement and 80’s nostalgia, and the theme captures that perfectly, preparing you for a trip to the Upside Down.

The world’s most popular science-fiction show has had one of the most distinctive themes since the first episode aired in 1963! Through it’s 13 seasons, the theme has changed and evolved, to reflect the change in the Doctor. All of them carry the same main elements, ensuring each one is distinctive to the viewer. The video linked below gives a run down of every theme that has been used so far!

4. Cartoon Themes Which Have No Right to be so Epic!

Often such a fond part of our childhood, cartoon and anime themes from our younger years always provide a big hit of nostalgia when we hear them again. But so many of them were actually great songs in their own right! For shows with only a 20 minute run-time, it is amazing how many have such brilliant and iconic themes! Here are three of our favourites.

“I want to be the very best, like no one ever was”! The original Pokemon theme is one of the most epic of all time. Any fan of the show will remember the iconic opening lyrics and get a massive hit of nostalgia seeing all their favourite Pokemon and characters from their childhood!

This memorable theme from the early 2000’s Batman cartoon really plays into his ‘World’s Greatest Detective’ nickname. With mystery and suspense, it is certainly a surprising choice for a children’s cartoon!

Attack on Titan has been one of the most popular animes over the past few years. It’s theme fits into exactly what you would expect from an anime, fast, exciting and dramatic.

The rise of Netflix Originals has been meteoric over the past few years, and the production quality is on par with many Hollywood films! Not least with their sound design and theme songs. We already mentioned Stranger Things which stands out in this regard, but there are other shows which really show how much effort (and money) is being put into these shows, and how popular they are. We wrote a blog about our favourite shows on Netflix from the past year, which you can check out here: https://www.gbposters.com/latest/netflix-top-10-shows/

The first is Queens Gambit, the hit show staring Anya Taylor-Joy as chess prodigy Beth Harmon, was one of the biggest of 2020. The theme is a classical piece by composer Carlos Rafael Rivera who had previously been nominated for an Oscar, which really shows the power Netflix is wielding in their Original series!

The period-drama Bridgerton became Netflix’s most watched show EVER a few months ago, and the classic, original theme really captures the mood and context of the show.

Featured products in this article 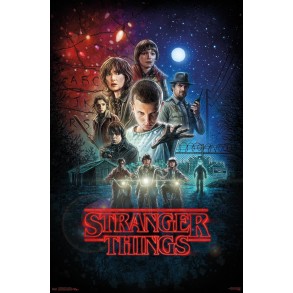 The internet went into meltdown last week as the BBC unveiled who was to take over the baton as the fourteenth iconic Time Lord – Doctor Who. Jodie Whittaker has held the role since 2017 and will now be superseded… Read more

We detail the top 10 Netflix shows our office has enjoyed over the past year! Queens Gambit, peaky Blinders, The Witcher and more.

After a crazy 2020, where we were starved of film releases to enjoy at the cinema, there is light at the end of the tunnel, and a huge amount of great films set to be released in 2021! We decided… Read more

Notify me when back in stock